LIFE CB SI project team visited last week representatives of three »Best of the Best« LIFE projects. The key information for us was their experience with preparation of project proposal, since they all successfully applied for more than one LIFE project. The visit enabled us to gain new knowledge, exchange experience and contacts, which will improve our support to Slovenian applicants.

One of the tasks of the project LIFE Capacity Building Slovenia is also to strengthen the knowledge of the LIFE team of the Ministry of the Environment and Spatial Planning, which is crucial for the successful implementation of trainings and advisory support to Slovenian applicants. Therefore we visited last week (October 8-12, 2017) three LIFE projects that received the “Best of the Best” (BoB) award and two projects that were listed as finalists (“Best” LIFE project). Each year the European Commission rewards the most successful LIFE projects completed in the past year. The external monitoring team NEEMO usually prepares a list of 20-25 finalists (“Best” projects), from which, on the basis of joint assessments of the monitoring team and national contact points, selects five BoB projects.

How to make a BoB LIFE project?

All representatives of the visited projects pointed out that a successful project management is a key to success. LIFE projects are administratively demanding projects with extensive documentation. Therefore, with each call, the European Commission again and again recommends an inclusion of a full-time project manager in the project proposal.

There is no successful LIFE project without a good LIFE project proposal. For most of the visited coordinators, this is not the only LIFE project – but they all prepared their project proposals themselves without the help of external providers. The Spanish NGO SEO / BirdLife (project VENENO NO) is applying for LIFE grants since the very beginning of the LIFE programme and prepares at least one LIFE project proposal per year. Over the past 25 years, they successfully obtained LIFE grant for 17 projects, and in many more they participate as partners. Similar statistic has the Spanish Fundación San Valero (project POWER), which has as applicant successfully won 12 LIFE projects; one of them was awarded the “Best of the Best” award and two “Best”. Among the successful applicants is also the Italian research organization C.R.P.A. (AQUA project), which has so far managed to acquire LIFE funds for all submitted project proposals, five as coordinating beneficiary and five as associated beneficiary.

In their opinion the key factors* for successful application are:

* Since the projects visited were approved in the previous phase of LIFE programme (2007-2013), there was not yet so much emphasis on multipurpose, synergies, integrations, replicability and transferability of results as today.

Which projects we visited:

SPAIN: VENENO NO – Action to fight illegal poison use in the natural environment in Spain (LIFE08 NAT/E/000062): The main goal of the four-year project was to significantly reduce the unauthorized use of poisons, which have a negative impact on the endangered species protected under the Birds and Habitats Directives, such as the monk vulture (Aegypius monachus) and the red kite (Milvus milvus). The project has developed effective innovative methods. They have established cooperation with key stakeholders who have been involved in the preparation of protocols and plans, six of which have already been approved and used in six Spanish autonomous communities. They set up a special investigative unit solely to deal with cases of illegal poisoning of wild animals, and conducted 19 professional training courses on the topic of the unauthorized use of poisons, attended by 500 people. The project activities improved the control and detection of violations. One of the results of the project is the changed perception of illegal use of poisons, which is now recognized and treated as a serious violation of legislation. Thus, after the conclusion of the project, there were already 13 convictions in court. The penalties vary from ban on hunting to prison sentences and financial compensations. One of the major penalties thus included 18 months in prison, a three year ban on hunting and compensation for the regional authority in the amount of 360,000 euros. The project received the award “Best of the Best” LIFE Nature project for the year 2015. Applicant: SEO / BirdLife.

SPAIN: POWER – Project for Optimisation of Water and Emissions Reduction (LIFE08 ENV/E/000114): In Spain, agriculture is the largest consumer of water, since in some places farming is only possible through irrigation. Among these areas is La Almolda (Zaragoza), where farmers are united in Montesnegros irrigation community, which participated in the project as a partner. In the project, two models of “good water management” were tested. On average an 86 % improvement in water consumption was achieved, which resulted from the introduction of a more efficient irrigation method and more successful prevention of water losses due to irrigation faults in the irrigation system. In addition, the energy efficiency of the irrigation system has been improved by 74 %, thus reducing greenhouse gas emissions. The project received the award “Best of the Best” LIFE Environment project for 2014. Applicant: Fundación San Valero.

SPAIN: DOMOTIC – Demostration Of Models for Optimisation of Technologies for Intelligent Construction (LIFE09 ENV/E/000493): In the project, three models of use of smart technologies (domotics and inmotics) have been tested – the use of various sensors and devices that automatically manage lighting and heating. Control of devices and condition can be managed remotely via the web application. By using new models, the annual energy efficiency of the building and the use of renewable energy improved by 64 %, reducing the annual quantity of CO2 emissions by 680 tons and reaching EUR 162,000 savings per year. On average, the investment in the model is reimbursed within four years. The project received the award “Best” LIFE Environment project for the year 2015. Applicant: Fundación San Valero.

SPAIN: POLYMIX – Polymer wastes in asphalt mixes: a way to increase sustainability of roads (LIFE10 ENV/ES/000516): In order to increase the share of re-use of polymers and reduce their disposal at landfills, POLYMIX has tested the use of polymers from various sources (e.g. bottles, bottle caps, end-of-life tyres) in asphalt mixtures. In order to asphalt the test section, 20 tons of polymeric waste was consumed, thus saving 60 tons of binder. Monitoring the wear of asphalt surfaces has shown that asphalt mixtures with polymers are cost-effective. Tested asphalt surfaces were more resistant (slower wear of road surfaces) and required less maintenance. The project received the award “Best” LIFE Environment project for the year 2015. Applicant: Universidad de Cantabria.

ITALIJA: AQUA – Achieving good water QUality status in intensive Animal production areas (LIFE09 ENV/IT/000208): Intensive livestock farming contributes to an excessive proportion of nutrients (nitrogen and phosphorus) in the environment. This problem is faced by some Italian regions where, due to intensive livestock farming, the permitted levels of nitrogen, which can be introduced into farmland with farmyard manure, are exceeded. The project has significantly reduced the pollution of underground and surface waters with nutrients from agricultural sources on nine farms with various measures. Measures included reducing nitrogen levels in feed, improving fertilization efficiency and promoting the use of livestock manure in agriculture. Some measures have been included in the Rural Development Program, thus ensuring their further dissemination. The project received the award “Best of the Best” LIFE Environment project for 2014. Applicant: C.R.P.A. 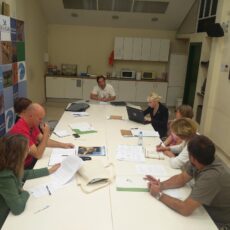 Meeting with the representative of the project VENENO NO took place at the applicant’s head office (SEO). 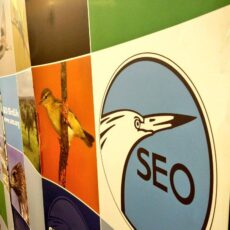 SEO/BirdLife is one of the five largest Spanish NGOs. 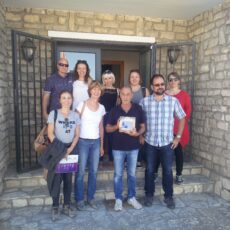 LIFE project POWER was presented to us by representatives of Fundacíon San Valero and Montesnegros irrigation community. 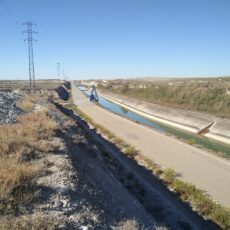 The water for irrigating the are of Montesnegros irrigation community comes from the Pyrenees through artificial chanels. 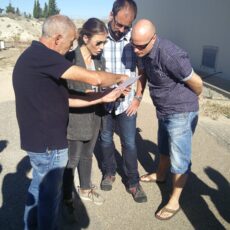 On the field they presented us the effects of the project – lower water consumption, lower irrigation costs and lower energy consumption. 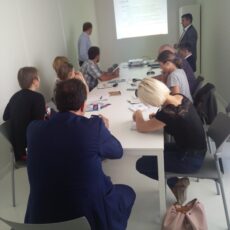 LIFE project DOMOTIC was presented to us at the San Jorge University, one of the project locations. 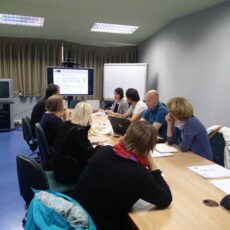 At the University of Cantabria we met with the beneficiaries of the project POLYMIX. 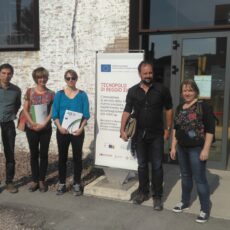 In Italy we visited the beneficiaries of the project AQUA. 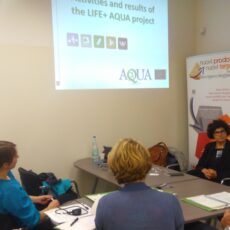 First they presented us the project itself and their experience with obtaining LIFE funds. 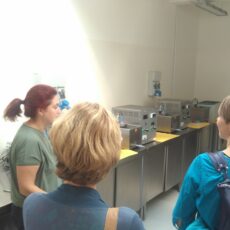 The presentation was followed by a tour around C.R.P.A. research facilities, where they perform analyses and test of different processes present in agriculture (e.g. at cheese production). 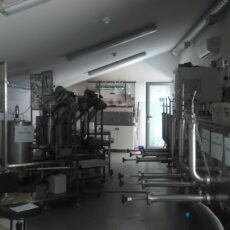 Among others they test how different types of manure influence the process of biogas production.